A serendipitous discovery while looking out for a summer retreat made us stumble upon this timeless edifice, waiting in the wings of time to be discovered…

We followed the trail laid out by ‘Sajan Nature Trail’ that was just a day’s wonder. Knowing we still had a few hours to go, before creeping back to Mumbai, we chose to go off the beaten track!


And that brought us to the bastion of the Munke family, the Jai Vilas Palace (Raj Bari) that stands formidable, yet dignified, despite the anonymity wrought by neglect! 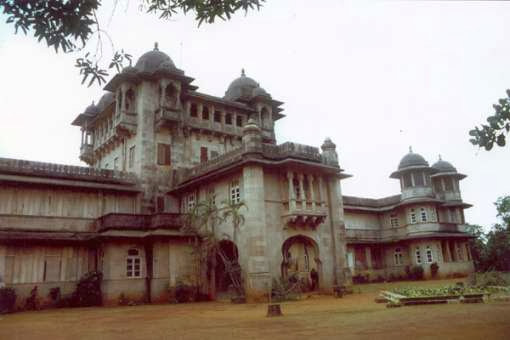 One look at the image that flashed on ‘search engine’ propelled me to walk further into the palace’s alleys. The summer heat notwithstanding, my family too was game for it. We drove along to this nondescript Jawhar Village.

After a two kilometer’s drive from Vikramghad, along tarred roads lined up with trees, we were soon greeted by cattle and human populace. Not many along the way knew about the palace, but our chancy sortie was rewarded! Soon, more and more people began directing us towards our destination.
Our thrill soon turned into dismay on being informed that we had to walk a mile, as vehicles were banned near the palace gates.
Umbrella in hand, we marched ahead treading on barren land, dotted with some shriveling shrubs and cashew trees. 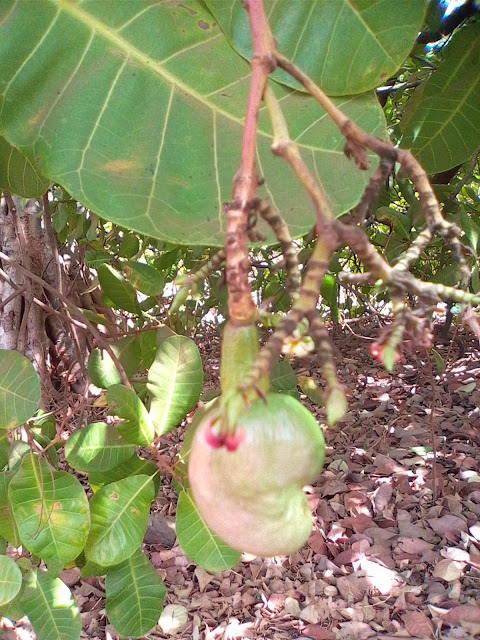 Soon, the towering minarets of Jai Vilas Palace appeared, as though welcoming us, and upon inching further, the edifice loomed large! One sight at the deserted palace and we knew it was the right step taken at the right direction! A cluster of dark chatris graced the palace, lending more elegance to this Munke masterpiece. 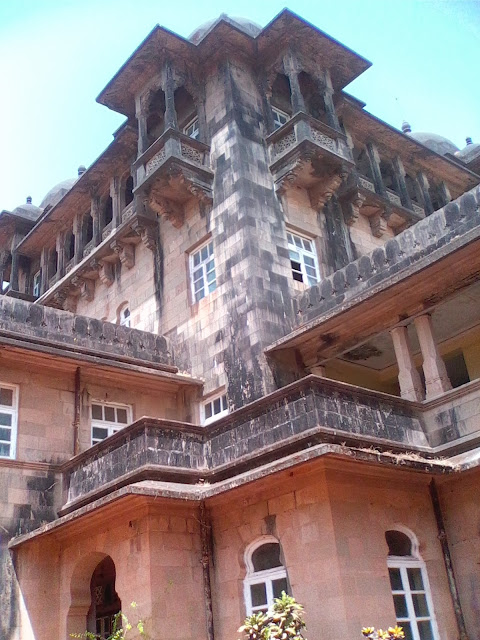 A little like Indore’s Museum, a little like some palaces of Rajasthan, the Jai Vilas (Raj Bari) stood in all its magnificence, belying years of neglect.

Chronologically, it’s a recent addition, the construction of which began in 1938 and ended in 1942. Built by Shrimant Raje Yeshwantrao Munke, it was indeed a monument that emerged out of a sepia tinted photograph!

The lawns were well-manicured, thanks to the eagerness shown by village folks for a job! The arched turrets resembling a ‘chatri’ and the shattered window panes looked all the more riveting. 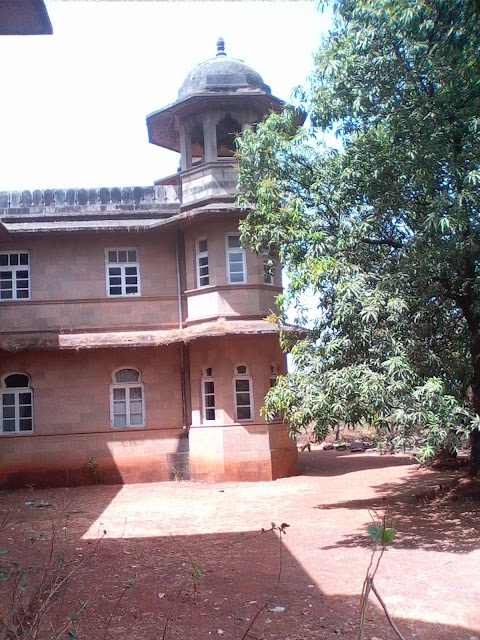 Hardly had we managed to click the most appealing side, when we were ushered in by the gatekeepers who agreed to show us around for a fee. Not that they knew better about this insignificantly significant monument but we let ourselves be guided.
Once upon a time, the palace housed the Munke dynasty, whose members today seem to be living somewhere in Pune and thus the disrepair. The Munkes were tribal kings of yore!
Entering the impressive arched gateway, we staggered into some of the spacious inner chambers.

We were at first appalled to find the derelict rooms. Some contained antique furniture that had seen the passage of time. Just as we sighed, wondering how awesome the palace must’ve been in bygone times, a few wall-murals caught our attention. Stunning paintings of women in graceful poses, and ducks and swans adorned the walls and it appeared that the king was a skilled artist. Faded they seemed, but the life that the artist had breathed into, still seems palpable!
In one room stood the mien of a stuffed tiger, posing as though it would spring upon us any moment. Apparently the king was an ace hunter too.
A winding flight of steps took us to the rooms on the first floor. These roomy chambers had a few knickknacks strewn about. An abandoned cradle lay in one, which might’ve served as a nursery to an erstwhile prince or princess. There were many more chambers which remain locked. The guide just shrugged off saying that they’d be open only when the royal family visited, thus lending an air of mystery, that shroud old dilapidated palaces.
So we roamed around the turreted balconies that opened into terraces. From the terrace, we realized that the palace was made to stand atop a knoll, the reason being to facilitate easy view of approaching enemies. In monsoon surely, the valley yonder would be a carpet of green and once you stand here, you wouldn’t want to budge an inch!

A Canon lay neglected in one corner, echoing times of strife, which the palace might have witnessed…

We were told that the palace doubled up as a milieu for film shootings today. It seems due to paucity of funds, the Munke family has not tried restoring it. This monumental wonder, am sure boasted of a glorious past, whose marvelous façade definitely vied for the splendor that was housed in its chambers!

We beat a retreat after capturing the archways and stairways where we posed.

I made my usual promise of returning someday. Whether I make it or not, this piece is for you, who can perhaps help in resurrecting this colossal castle, with a single visit. I’m sure the place will not disappoint you.

How to Reach Jawhar-The distance between Mumbai and Jawhar spans about 161 kms and takes 2 and half hours to reach, thus making Jawhar an ‘idyllic weekend getaway’.
The Dadar Kopra Waterfalls, Shirpamal and Bhopatghad Fort nearby also make for interesting getaways.
Stay At– A few hotels dot Jawhar Village and one can always try Sajan’s Nature Trail which offers ‘Tree Top Homes’ on stilts. 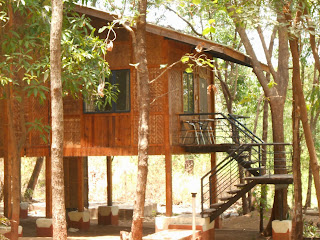 Shopping-Vikramghad & its surrounding places, including Sajjan, boast of Warli Paintings. None can resist the simplicity & clarity of images that these paintings hold.

Rural themes and ‘bonding of women’ celebrating a festival are a constant. This art though seemingly simple (seems like child’s play) is neatly done, capturing the profundity of humans and animals alike! Villagers would love to teach you the art. 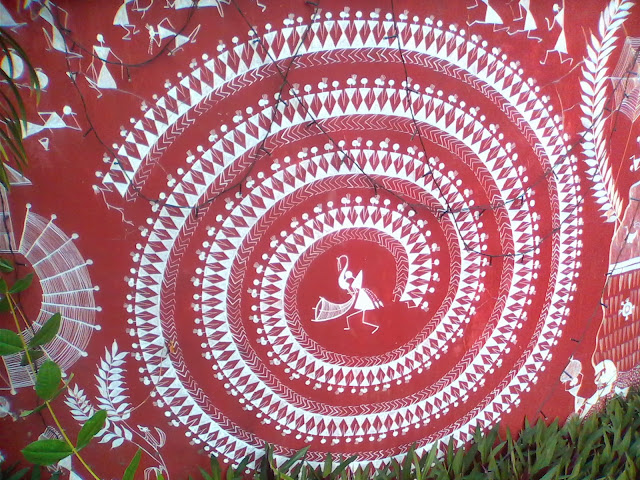 Warli Paintings of humans, beasts and birds done in white on a contrasting hue of earthy colors like brown, grey and green, form an eye-catching distraction.

The use of just 2 contrast colors is enough to throw the obtrusiveness on canvas! Contrast is the style, no matter which 2 colors contrast!

Here’s one in black and white, perhaps a couple trying to rock the familial boat by rowing merrily to alien shores😉 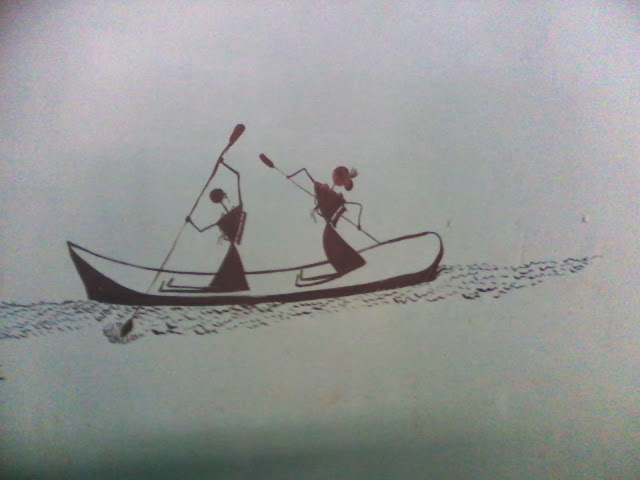 The ‘Tree of Life’ under whose boughs the Hindu Pied Piper Krishna stands playing his flute & inspiring beasts and birds to dance to his tune. This encompasses the cosmos! 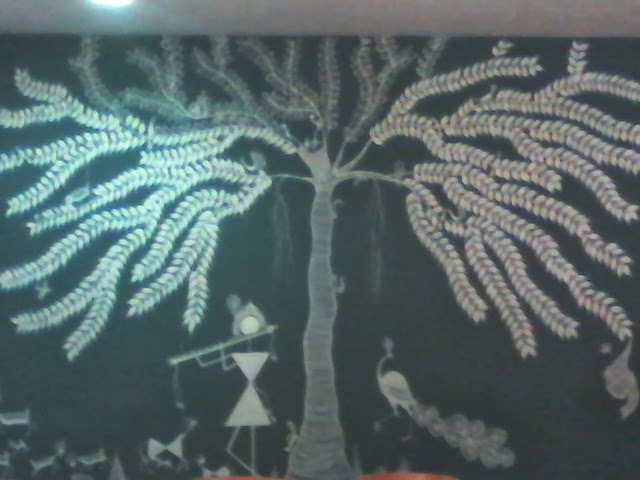 We bought a few & locked a few on our lens & promised to return for some more.

Do cast your footsteps on the soils of Jai Vilas…sweep your glance over echoing chambers and discover the mysteries lurking in Jai Vilas!