In pursuit of my studies in Chinese Metaphysics, I landed in Kuala Lumpur, a couple of years back. Among the many visual treats KL had to offer, both natural and artificial, was the Thean Hou Temple, whose impressive architecture is sure to leave one bewitched. 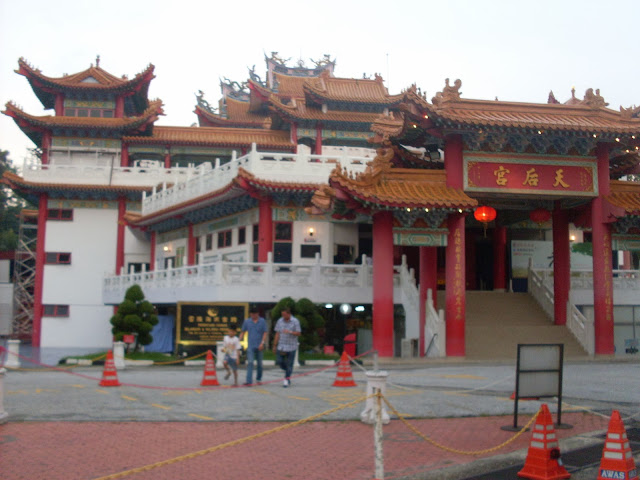 On my first day in KL and the evenings that I spent exploring its by-lanes, one thing I noticed- KL does have its share of Chinese and Hindu temples, given the many Hindus who migrated from India and Srilanka. But

some Chinese temples suddenly sprouted from any available space in Chinatown and some seemed out of place, flanked by shops! But, the Thean Hou Temple is a masterpiece whose architectural finesse and surroundings are both commendable!
On my last but one day in Kuala Lumpur, I ventured to visit this famed temple, which is a veritable visual treat!
Mind you, it is not ancient compared to the many Chinese temples, but it still possesses the mystical elements and allure, that Chinese architecture boasts of.
Located atop Robson Heights, this 20th century temple just dates back to 1987!

I hailed a taxi and told to be taken to the site. After what seemed like 15 minutes from Little India, I was stuck in a traffic jam. It was 5 pm and the driver, a Malay turned around and in a surly tone asked me, “Mam, you want to see this themple?(The natives cannot utter ‘T’ as in ‘train’) Thraffic very bad and ith will thake long thime thoo reach. You go another day.” That seemed like an order!

I was determined and replied, “Yes I do. If you say the temple will remain open for another few hours, then why not? I’m willing to brave the traffic snarl!”

He then employed another ploy, “Look Mam, you from Indhia, a thourist, you be careful with your walleth. Money getthing lost.” He continued, “No thaxi you find and you noth reach Little Indhia.”
Wondering if that was a genuine concern or a gambit, I literally entreated, “I’m an Indian and I heard that this is the best temple in town and it’s my wish to see the temple before I leave day after”. This worked and magically the traffic also seemed to ease.
In a few minutes, we rode past Lorong Bellamy to Robson Heights -a quiet residential colony. The driver halted at the gates of a white façade and beamed, “Here Mam, is your themple. You go and have good visith.” Gratefully, I bade him farewell and entered the precincts.

Lo and behold! What stood before me was a stunning scene! The majestic 6 tiered Pagoda adorned with soaring dragons lay amid a beautifully landscaped lawn bearing statues of Chinese deities. I must emphasize that despite modern buildings towering the complex, the beauty of the colorful temple did not pale. Instead, it felt like an enchanting paradise that blended well with the surroundings.

Each stood without clashing the other. 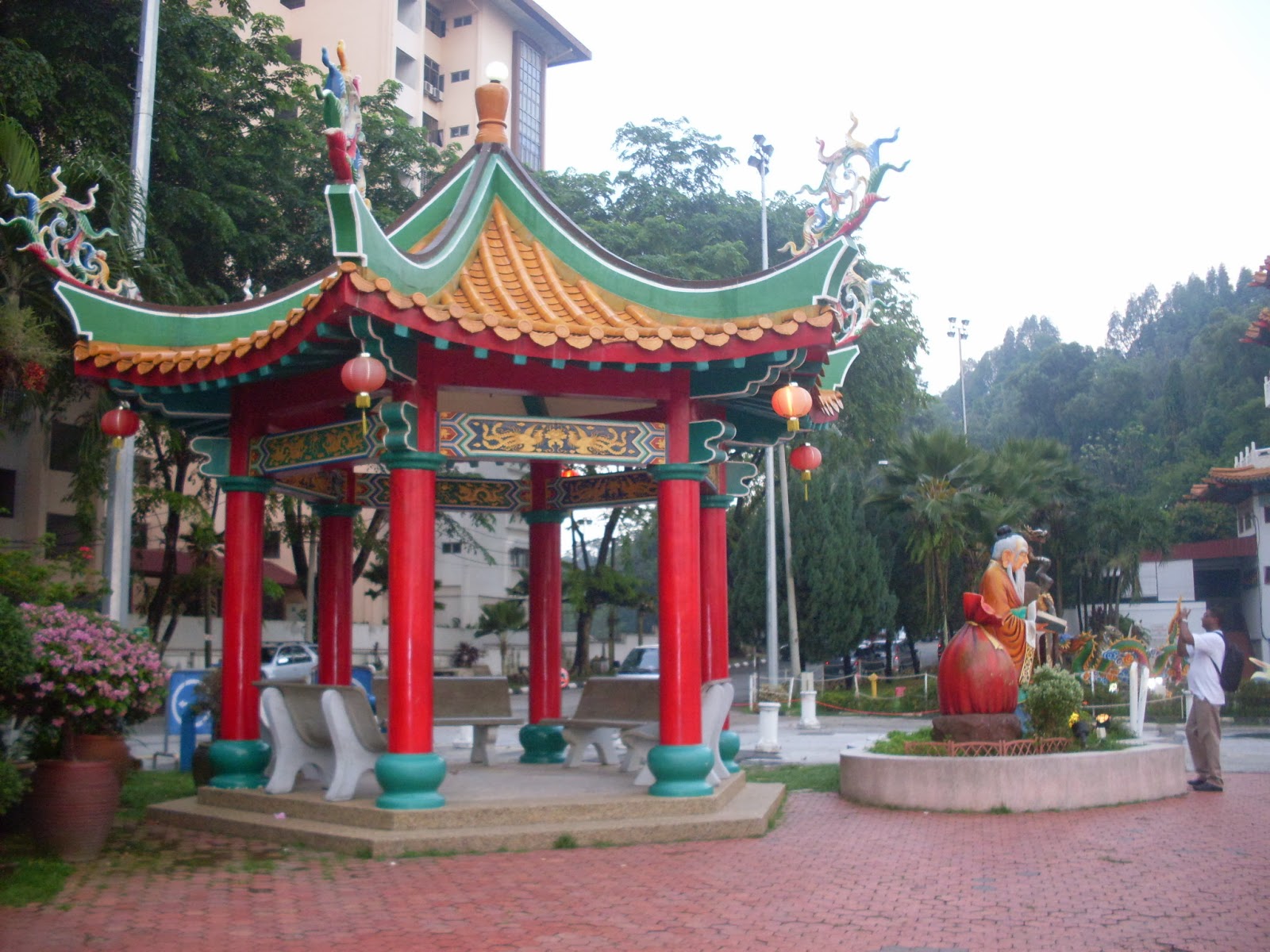 Festooned statues of Guan Yin adorned one side of the garden and on the other were those of the 3 Wise Men, who are the Gods of Prosperity & Joy, Wealth and Longevity. There was the sculpture of the 12 Animals of the Chinese Zodiac on another side.

I neared the effigy of the 3 wise men.  The ‘God of Prosperity’ is seen holding a child. The ‘God of Wealth’ holds a scepter sword and the ‘God of Longevity’ is seen bearing a peach and a staff.

A stone figure of the Scholar Man with a voluminous tome in his hands stood next to a pagoda. 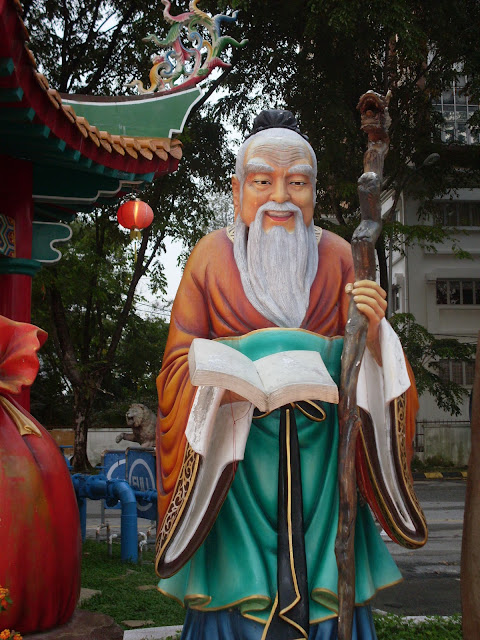 On a rock garden stood the elegant sculpture of Kuan Yin herself, with a pitcher in her hand -sprouting water. She

stood amidst a pond of water with a gentle waterfall cascading from the surrounding rocks. 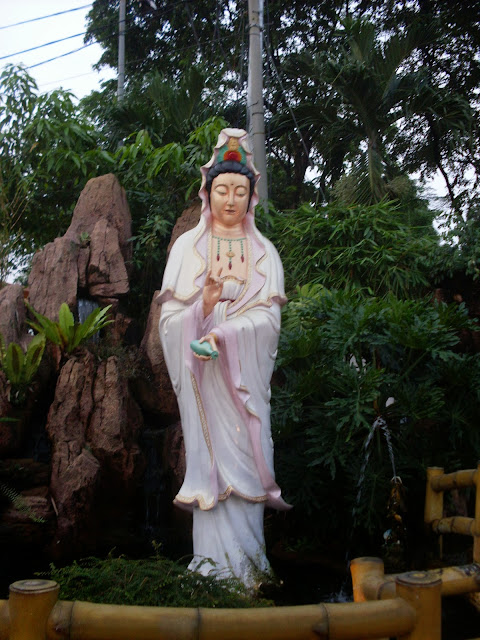 I proceeded to the ‘Wishing Well’. A man who doubled up as a guide to interested visitors, said that I could make a wish! Need I think? Fervently, I began mentally preparing my list and soon earnestly petitioned all those desires and dreams to the well, albeit silently. That moment was a holy communion I had with the well and the place!

A tortoise pond nearby completed the picture. Soon I came face to face with the main entrance to the temple. Beautiful balustrades done up in bright colors and embellished with golden dragons, other mythical beings and calligraphic couplets vertically written, supported the structure. Even the eaves bore gracefully designed domes. 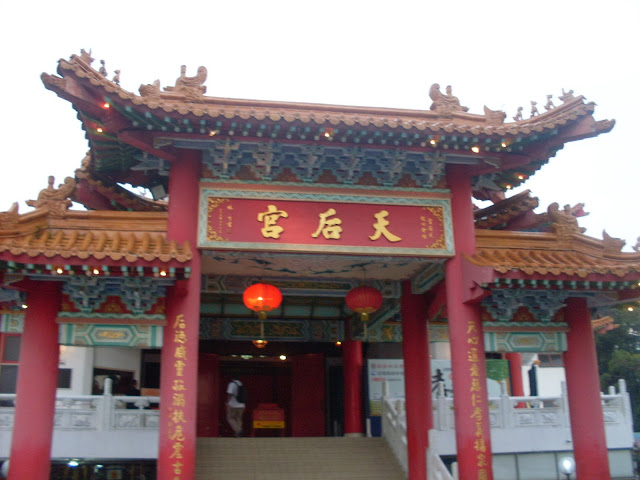 The Pagoda -an archetypal of Chinese architecture stood in its magnificent glory! Ostentatiously done, it spelt of elegant opulence, exuding cheer and joy espousing the fact that prayers will indeed be answered! Unlike some simple temples that are bereft of carvings or sculptures, which evoke qualities of devotion, this temple reflects another facet of devotion that endorses the importance of prosperity in life.

As I entered the prayer hall, I was greeted by a girl selling joss sticks. I bought a few and engaged in small talk. And she on her part enthusiastically explained some interesting features of the temple. “Mam, you make wish in temple, Guan Yin fulfills wish. Many tourists come here to make wishes. You have any in mind, pray and your prayers will be answered”, she assured. I smiled and proceeded to make wishes!

Inside the prayer hall were enshrined 3 enormous forms of deities. The one in the middle is that of ‘Tian Hou’, the

Waterfront) to the left. I was instantly reminded about the term ‘Shui’ meaning ‘water’ and hence the name for the Goddess! 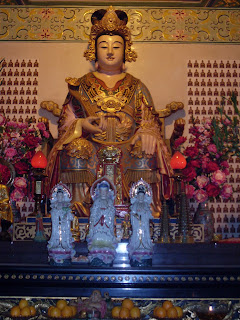 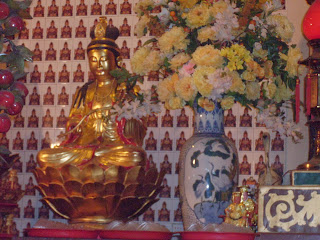 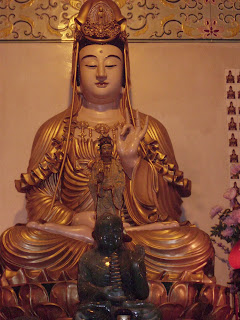 The kind faces of all three deities evoked a certain motherliness and compassion. No wonder the whole place vibrated with feminine energy! Don’t know why, but I’ve always felt extremely comfortable in the feeling that feminine energy is the ‘supreme most’. 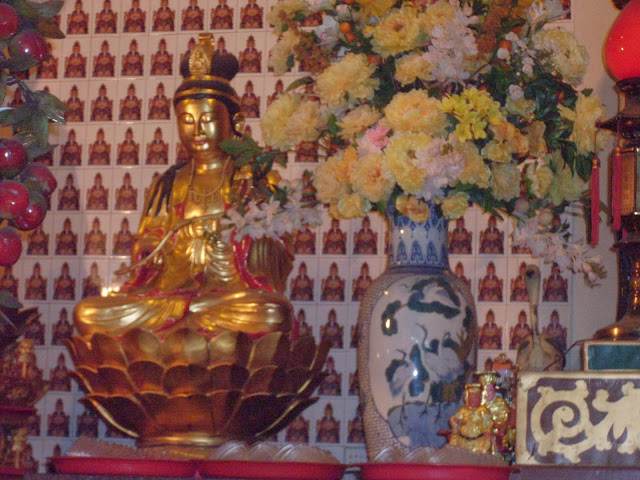 Their assuring faces reflected a striking benevolence and that moment was indeed overwhelming! 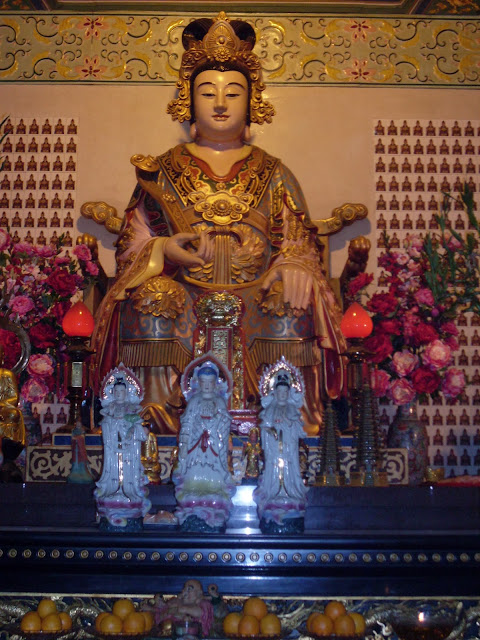 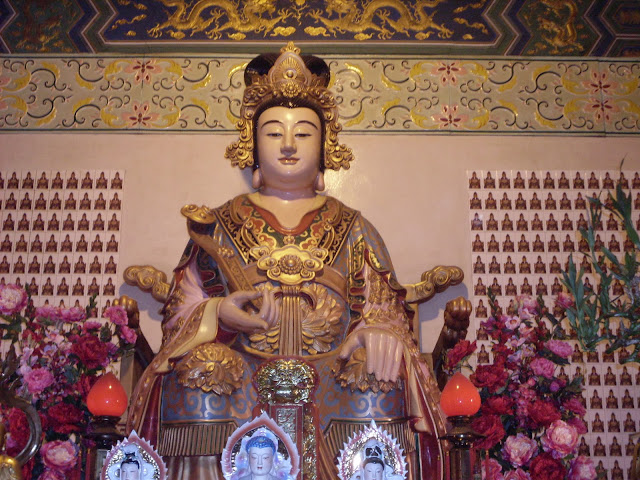 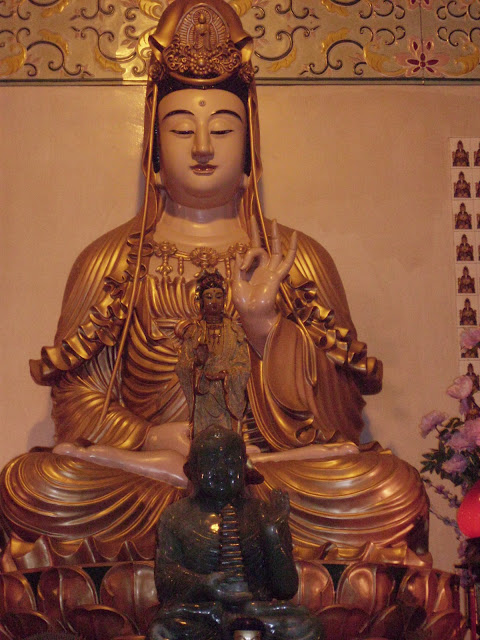 Although the temple is dedicated to the ‘Goddess of the Waterfront’, it is Kuan Yin who is sought after, I heard.

Like all things oriental, murals of Dragons were a constant on the walls, dragons denoting strength, virility and valor. 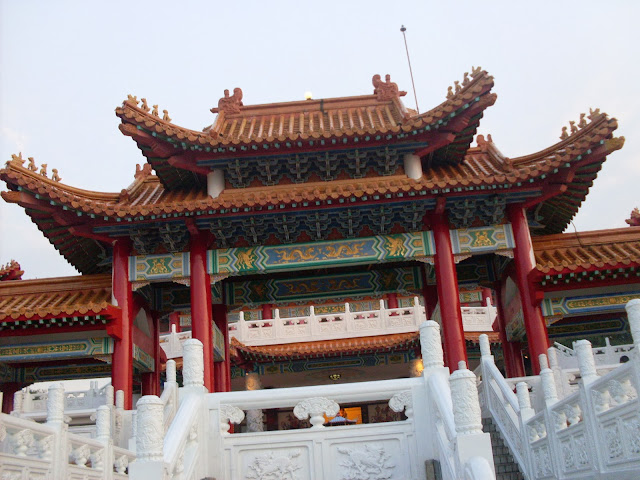 An interesting feature in the prayer hall, are the pairs of Kau Cim oracles which are used as fortune telling oracles!
Spellbound by the tranquil ambience, I sat in a corner, closing my eyes and shutting the jarring world out. It was mesmeric and I just couldn’t tear myself from the pervading trance even when I opened my eyes.

Dusk was dawning. One last time I made another fervent wish, “Please Goddess, let me make another trip to your abode, soon with my family”. Spelling that wish, I left the main hall.
Just outside was another small pagoda with dragons guarding a lit lamp. Pretty Chinese ceramic urns held lovely cut flowers..

I stepped out into the open and yet another interesting sight greeted me! For, on the open courtyard was a group of students quietly practicing Tai Qi – guided by their Master. So quiet and refined was the group that only its synchronized movements were the sounds heard!

The setting sun peeping through the open eaves of the pillars, cast a pinkish blush. The entire courtyard seemed magical! I stood watching the group’s graceful performance. 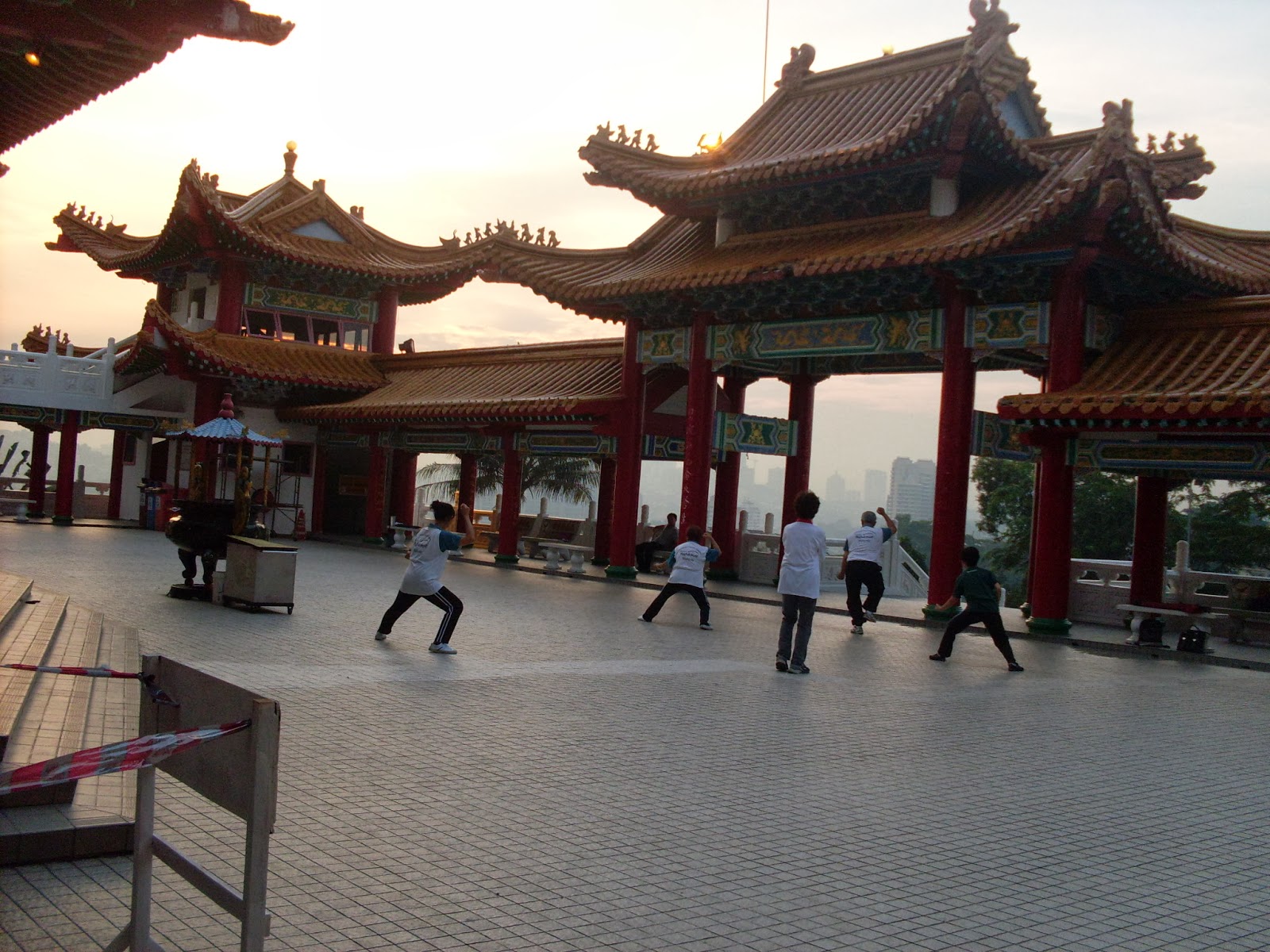 Soon the driver’s words sent alarm bells ringing. I had to be at Wangsa Maju for the night for which I needed to board a train from Stasen Central!!

Throwing cautions to the wind, I stood at the porch overlooking Jalan Syed Putra. Hodiernal establishments dotting the landscape seemed a far cry from the stateliness of the temple. 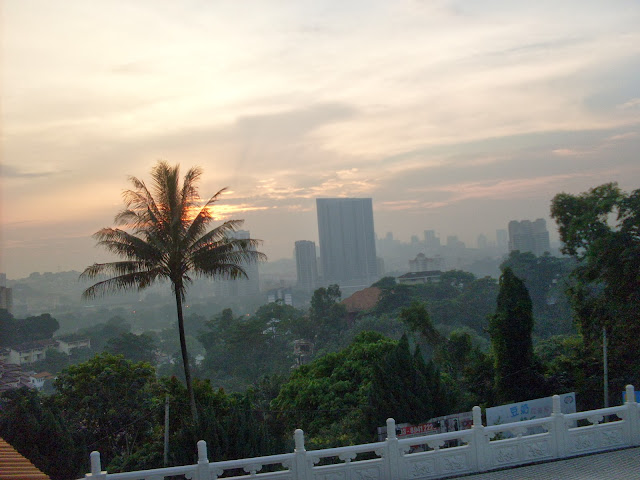 That porch separated onlookers, completely dividing two separate worlds! Mind you, the temple is a recent addition, but the marvelous architecture, coupled with the divine ambience is what transports you to another era!

Outside lies a a Herb Garden. 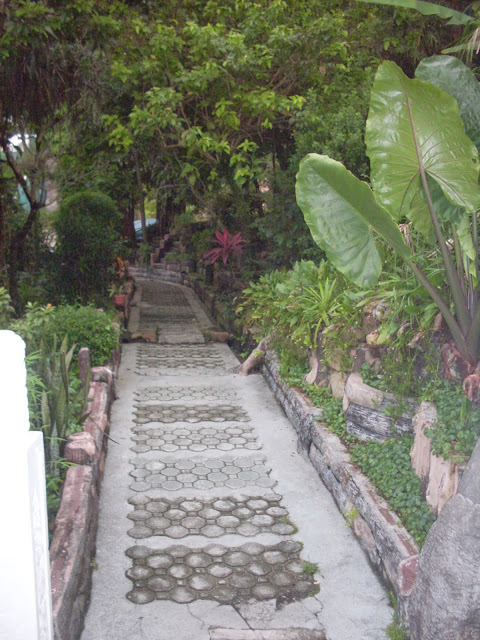 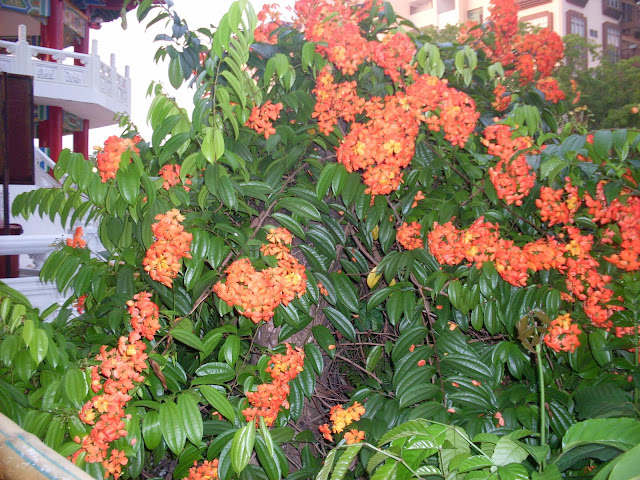 I was looking for Chinese music CD’s usually found in temple precincts. During my visit to Singapore long back, I stumbled upon cassettes with Chinese music and chants of ‘Om Mani Padme Hum’. Since then I’ve been hooked onto this music. The helpful lady at the counter led me to the place which contained numerous CD’’s and booklets.

I stood counting the ringgits in my purse, when she exclaimed, “This is free. You don’t pay for this. You like CD’s, you take. Community keeps these for the welfare of mankind’! Did I hear that right? I bagged a dozen CD’s and a few booklets asking again if I heard it right. But as a mark of gratitude I left a few notes at the altar.

I had to go, so I took one last glimpse at the temple and prayed in silence that I make a re-visit soon, and left. 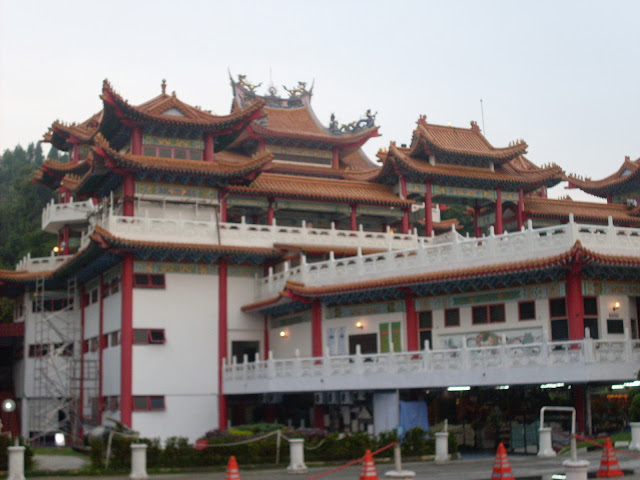 A souvenir shop selling Chinese curios is within the complex but was closed for the day. A little disappointed, I consoled myself that I had another day to visit the Central Market.

My Prayers Get Answered!!
I left the gates only to find the road deserted. Very few devotees were seen then and so no taxis. With my laptop slung on my shoulders &, balancing other paraphernalia, I decided to walk the stretch. Few yards away, stood a group of Indian boys with a smirk on their face. The boys were young and used broken English to rattle passersby. Although they weren’t up to anything, they surely wanted to see me perturbed.
I sent a silent prayer to the 3 deities saying, “I came all the way to visit you’ll. I am all alone from another country, can’t you send a taxi soon?

A car zoomed and stood alongside me. On the driver’s seat was a woman with a man next to her. Behind was another woman. They seemed decent. The man spoke, “Mam you’ll find no taxi here. The place is a bit deserted. And it may not be that safe. Can we drop you somewhere.” Although grateful, I had to be cautious. Seeing me hesitate the man prodded, “You don’t have to worry. There are 2 ladies here; you’ll be safe”.
Taking that as a sign from the Goddesses, I accepted the offer. The 3 people seemed to be a ‘godsend’ (shall we say Goddess-send?). They drove me to Little India, from where I walked over to Station Central, after thanking them. After shopping at the station, by 8 pm, I was in Wangsa Maju.
To this day, Then Hou Temple and the Guan Yin deity are a constant in my mind. Whenever a wish seems a far cry, I never fail to pray to Gaun Yin….